It took me longer to sing in Myrtle Beach than I expected.

I was scheduled to sing the National Anthem in July, 2016 for the Pelicans. My flight was booked on Southwest Airlines, the hotel room was reserved, and I was packed to leave in about five hours, the day before I was to sing.

Then I got the text from the airlines that my flight was cancelled due to problems throughout the airline’s computer system.

In a panic, I considered jumping into my car and driving the whole way that day. I didn’t want to pass up the opportunity to sing at one more ballpark in the Cubs’ farm system. If I didn’t take this opportunity now, would I get another chance?

I decided to take that risk and cancelled, notifying the team that the Southwest computer problems, which had been in the national news for the past two days, had taken another casualty. Could they find a substitute singer the day before the game?

Fortunately, they had other options, including a video track, so I was off the hook. I was able to cancel my hotel rooms and hope for another chance in 2017.

That confirmation came in April when I emailed the Pelican’s coordinator for the Anthem. She invited me back to sing and gave me a couple of dates to consider. I settled on the first Saturday of August.

This trip would be a driving trip of nearly 1,300 miles. But, I also had another purpose for driving: I was free to stop along the way to tell bookstores about my first published book – THE SECRET OF THE SANTA BOX, which would hit shelves in November. I packed a good supply of bookstore flyers to distribute to Christian and Barnes & Noble bookstores along the way.

I took off early Friday morning and drove southeast towards Chattanooga. While driving over the foothills of the Great Smoky Mountains near Monteagle, there were deep green trees covering the hills as far as I could see. 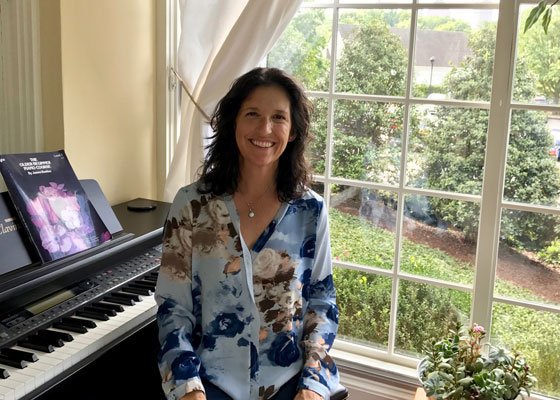 My first stop was Atlanta, where I visited a couple of bookstores and my sister Maria’s new “old” house where she lives with hubby David. The remodeled 1920s era house features a basement room with a wooden bar and shelves, harking back to the prohibition-era days when the room was a hidden speakeasy. Customers’ initials and visit dates were carved into the wood.

Additional stops that day included bookstores in Augusta, Georgia and Columbia, South Carolina. I settled into my room that night at the Red Roof Inn in Florence, South Carolina after dinner at Western Sizzling. I chose this motel because it was much cheaper than Myrtle Beach hotels. I’m sure it’s location of 90 miles away from the beach undoubtedly had a lot to do with the lower price.

The next morning I hung my Cubs logo shirt, the one I usually wear when I’m singing, in my car and took off for Myrtle Beach. I stopped at three bookstores around the city and then walked along the beach. The game wasn’t until 7 pm, so I had some time to kill.

This game was also special because my high school friend Brenda Bray White lives in Myrtle Beach and would be my guest at the game. What’s more, my uncle Mac O’Connor and his wife Sharon retired to South Carolina and will drive over for the game. It would be great to have a friend and family in the stands when I sing.

After a scrumptious lunch of fried oysters, I got to TicketReturn.com field and headed to the Fan Shop for a Pelicans home ball cap and shirt for Tommy. I texted photos to him and he picked the one he liked best.

I met up with Brenda and we got our seats. I then headed to meet up with the Pelicans staff member that would take me down to the field for the pregame activities.

It seemed like I was on the field for a good 15-20 minutes, trying to warm up and go over the lyrics like I always do in preparation for the Anthem. I had made up my mind to also modify my rendition just a bit by adding a crescendo and singing up the scale at “our flag was still there!”

Finally, it was time to sing.

The announcer invited everyone to stand and sing along. The video camera guy got into position to film my rendition. The staff member handed me the microphone, already turned on. I blew my starting note on my pitch pipe and began to sing.

But I couldn’t stop and start over, I had to remain calm, professional, and keep singing. I concentrated really hard and sang the rest of the song without another incident. I even got a few cheers from the crowd when I sang the crescendo at “our flag was still there!”

I held out the final notes and ended the song to some polite applause. I handed the microphone back to the staff member and headed back to my seat.

Boy, did I feel terrible. While a few people said “Good job,” to me along the way, I kept my head down and was upset. I had never messed up that badly during the Anthem before. Sure, I had a “black spot” while singing in Jackson, but that worked out. I also slurred a couple of wrong words before a Vanderbilt basketball game, but it wasn’t too noticeable.

No, this was the worst I had ever sung our National Anthem.

When I got back to my seat, I was flushed and embarrassed. My friend Brenda was very kind and supportive. A singer herself, she liked my rendition. My aunt and uncle also congratulating me on what few people can do if they get the chance.

It was a beautiful evening and the game went well for the home team. Zack Short, Trent Giambrone and Jesse Hodges all three homered as the Pelicans beat the Salem Red Sox 4-3.

Looking back, I think that I did not prepare very well for this performance. I spent a lot of time thinking about my book and stopping at bookstores. I had lots of travel time before getting to the park. Even the details involving the fan shop and my friend and family members attending the game could have added to my distractions. When I reviewed the video, I even heard the announcer mispronounced my last name, though it didn’t register at the time.

Still, the fault rests solely on my shoulders. I will just have to sing it better the next time.

For good or ill, the next time was approaching very quickly. On this day I walked in the Atlantic Ocean. Next weekend I will walk in the Pacific Ocean before singing the Anthem for the Eugene Emeralds in Oregon.

I better get my head on straight for that game!