As part of my preparations to sing the National Anthem at Wrigley Field in two months (in 2004), I needed a live performance to sharpen my performance and calm my nerves.

Since the AA affiliate of the Cubs was in Jackson, Tennessee, just a few hours west on I-40, I contacted the club and checked on an opening to sing. I was glad to hear that the Diamond Jaxx needed a singer at the beginning of August and they would be happy to invite me to sing.

(I think it helped that I could truthfully tell Jackson that I was scheduled to sing later this year at Wrigley. This strategy of using the Wrigley Field performance proved invaluable as I set up performances throughout the entire Cubs organization.)

After church on the day of the game, Linda and I drove the two-and-a-half hours to Jackson, which was founded in 1821 and named after Andrew Jackson, a notable Tennessean and seventh president of the United States. 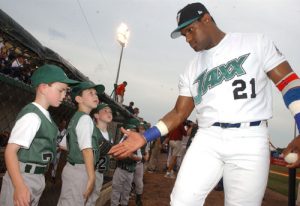 The Diamond Jaxx were the AA team in the Cubs’ farm system. Earlier in the season, the Cubs’ homerun-slugging outfielder Sammy Sosa had played a couple of games with the team, needing to rehab an injury before rejoining the Cubs. Photos of Sosa in a Diamond Jaxx uniform were still on sale in the Fan Shop. (Photo by Erika Alexander, The Jackson Sun).

When we finally arrived at The Ballpark at Jackson (then called Pringles Park and nicknamed “The Big Chip”), it was an hour before the first pitch at 6 p.m. As we walked up to the main entrance, we couldn’t help but notice the big, bright red, brand new Dodge Ram truck parked on the sidewalk in front of the game. In the windshield a sign stated “2005 Dodge Ram Truck, available at Jackson Motors.”

I checked in at the ticket office and met Jason, my staff member contact for the Anthem. He instructed us to have a seat inside and meet him back here outside at twenty minutes until six.

Linda and I got two seats in the near-empty stadium. It was, after all, a Sunday evening in the South. Many folks were driving to evening church services instead of the ballpark.

After giving Linda the camera, I kissed her goodbye and walked to meet Jason, warming up and singing the lyrics along the way. I constantly sing through the lyrics softly prior to my performance. I want the words to flow naturally in my singing, fighting against the fear of forgetting a word or phrase during the live performance.

I met Jason by the red pickup truck and I was surprised when he said, “Hop in.” Now, every other time since Jackson, when I’ve sung the Anthem at a ballpark, I have been personally escorted to my singing position. This would be the first time I was ever driven to where I would sing!

Jason drove the truck outside the park down the third base side until he reached the left field corner. Another staff member was there to open the gate so the truck could enter and drive along the red cinder warning track.

At the same time, a stadium camera focused on our truck and sent the live feed to the center field Diamond Vision video scoreboard. As the camera tracked us driving around the perimeter of the outfield, the stadium announcer proclaimed, “And here comes our National Anthem singer in a new 2005 Dodge Ram Truck, on sale today at Jackson Motors!”

As we made the turn at the right field corner, I noticed the team mascot was standing on the first base dugout. As we drew closer, the truck slowed down to a slight crawl, and the mascot ceremoniously jumped into the back of the truck, his arms waving to encourage the sparse crowd to cheer.

A few seconds later, we arrived behind home plate where there was a microphone and stand waiting. Standing nearby were the umpires and both teams, lined up along each foul line.

“Ladies and gentlemen, please rise, remove your caps, and join Chris Fenoglio in the singing of our National Anthem,” intoned the announcer. I blew my starting note on my pitch pipe and began to sing.

Now, when I’m singing the Anthem, some details of the ballpark do not bother me: the crowd, the field, even a slight delay between when I sing a phrase and when I hear that phrase over the stadium speakers. Instead, I concentrate on my voice quality, a clear pronunciation of the current words I am singing, and “cueing up” the next phrase I will be singing.

On this evening, however, I had a new distraction: my own face!

I was standing near home plate and facing toward the scoreboard in right centerfield. To my left, up the third base line, stood a staff member with a large, TV-station quality video camera. He was filming my singing and projecting my image live on the scoreboard.

Fortunately, there was very little sound delay in the speakers, and while it was weird to sing straight to my face, I was able to hear just fine. I shifted my feet slightly, squared up to face centerfield, and was able to ignore my video image and concentrate on my singing. 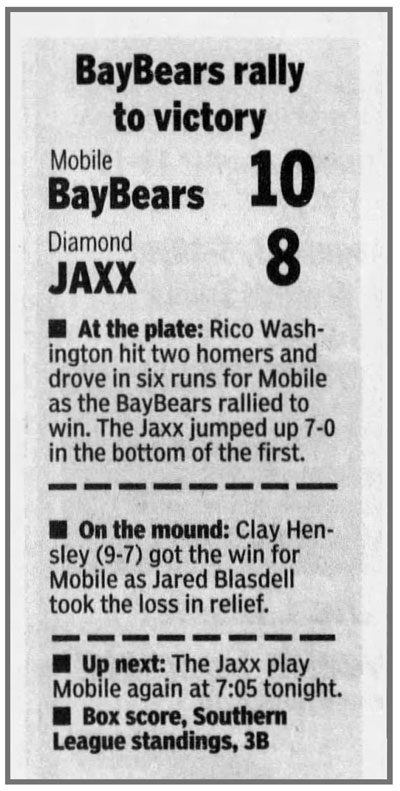 It’s a good thing that I minimized my distractions.

Like I described above, as I sing, I concentrate on both the lyrics I’m singing and the ones I’m getting ready to sing. This helps me sing smoothly from one phrase to another. So, as I neared the halfway point of the song, I felt that everything was flowing freely.

But when I started the third stanza “And the rockets’ red glare…” I only saw a black hole afterwards. It’s like my internal teleprompter had lost power and I had no idea what phrase was to be sung next.

In the split second that I sang “red glare,” I told myself to just keep singing. I committed to keep singing and the right words came out: “the bombs bursting in air.”

I suppose that my pregame ritual of constantly signing the lyrics had paid off. Like “muscle memory,” my subconscious knew what words to sing, even if my frantic conscious mind had forgotten.

I finished the song without any other difficulties and received a nice applause from the crowd. I allowed myself one last peek at my face on the Diamond Vision scoreboard before climbing back into the truck.

Jason congratulated me on my rendition as we drove down the third base side near the stands, out through the left field gate, and back to our starting point in front of the stadium.

I bought a hot dog and cold drink, sat back down next to Linda, and enjoyed the ballgame. The Diamond Jaxx played well, but the Bay Bears came back to win 10-8.

I wonder if Slammin’ Sammy Sosa ever allowed himself a peek at himself on the Diamond Vision scoreboard before stepping into the batting box at Pringles Park. If he did, I’m sure it is one of millions of memories from his playing days, now melting together in a colorful kaleidoscope of images.

For me, I’ll never forget standing there singing, in front of home plate next to the red truck, a 30-foot-tall image of me projected onto the scoreboard, and a black hole where the next words should be.