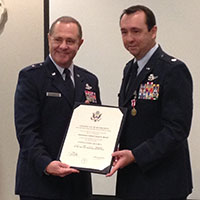 The Star Spangled Banner is truly our song. Whenever Americans gather for public and/or important events, the song unites the participants and focuses attention to the beginning. But when you look deeper, you realize that the song about our flag means a whole lot more.

When I worked at HCA (Hospital Corporation of America), the company always held an annual fundraising campaign for the United Way. One year we held the kick-off event across the street in Centennial Park and I was asked to start the event with the National Anthem.

Since Connor had been the Field Commander for the Father Ryan High School Marching Band, I knew the band directors and many of the band members. I called Jeff Schletzer to ask if he could send over a snare drummer from Father Ryan’s world-renowned Drum Corps. He sent over Kevin Ferriman, who arrived in full dress uniform and played a great cadence and drum roll as an introduction to my performance.

Another Father Ryan parent, Jill Bacchus, asked me to sing the Anthem at the opening of the Tennessee Society of Certified Public Accountants, for which she was the current president. The meeting was downtown, inside the (old) Nashville Convention Center, across Fifth Avenue North from the Ryman Auditorium.

We met in in a close, window-less conference room, but I could sing on a raised platform through a good microphone. Singing in a room like this requires a different kind of control. Unlike singing in a big stadium where I need to fill up the expansive space with lots of sound, singing indoors is more about breathing and pitch control. I need to keep my energy up so to stay on pitch, but not too loud that I would overwhelm the room.

Another closed-room Anthem was at the Marriott in Brentwood when I sang for the Senior Leadership of LifePoint Hospital’s twenty largest hospitals. Eric Deaton, the fun-loving CEO of Danville Regional Medical Center and husband of my THS classmate Rives Blanton Deaton, asked me to sing before his presentation. I sang the Star Spangled Banner during a PowerPoint of rotating patriotic images before the final image being an aerial view of Danville Regional, the “All American Hospital!” 🙂

There was even a second act to this particular performance. Before Eric’s final presentation, when everyone was getting tired in the afternoon, he asked them all to take a 7th Inning Stretch. He then introduced me as Harry Caray as I wore big glasses, a black scruffy tie and black hat while I sang “Take Me Out to the Ballgame.”

“All right, let me hear ya,” I said in my best Harry voice, “a 1, a 2, a 3… Take me out…” Of course, when I got to the end, I sang how it would be a shame if the Cubbies don’t win, while John Bumpus shouted “Cardinals” from the back of the room. Good times!

One warm Saturday morning I drove downtown and parked near the Country Music Hall of Fame. I walked over to the Walk of Fame Park in between the Hall of Fame and the Downtown Marriott. A stage was set up at one end with a large banner reading “Susan G. Komen Run for a Cure” hanging from the top. At the invitation of dear friend Tracy Rode, herself a cancer survivor, I sang the Anthem before the start of the 5K Run.

So many runners wore pink and ran for themselves or a friend or family member who has or had cancer. It was inspirational to see so many people united in pink and running for a common cause. 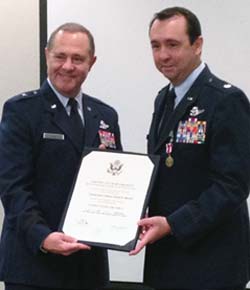 But the most inspirational and patriotic setting for the song occurred in January 2014 at Dobbins Air Force Base near Marietta, Georgia. My brother-in-law David Mirolli, Maria’s husband, was retiring from the Air Force Reserves as a lieutenant colonel. During a 27-year career encompassing both active duty and the reserve duties, David flew C-130s throughout Europe and the Middle East. His many missions included Operation Desert Storm/Desert Shield in UAE and Saudi Arabia, Operation Provide Comfort in Turkey, Operation Provide Promise in Bosnia, and Operations Enduring Freedom and Iraqi Freedom.

As I stood in that small room surrounded by family, friends 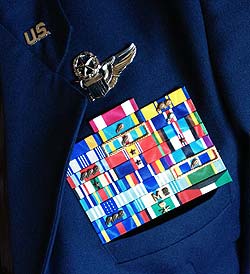 and generals I was impressed with the solemn dignity of the formal color guard marching confidently down the aisle.
When the color guard stopped, the other flags bowed, leaving the Stars and Stripes upright. That was my cue to sing the Anthem – the first time I sang the song publicly in more than a year.

“And the rockets red glare, the bombs bursting in air, gave proof through the night that our flag was still there.” This last phrase is my favorite of the song and I always emphasize it more than another other part. No matter how damaging the bombing of Fort McHenry was that fateful night, our American flag was still standing in the morning light. 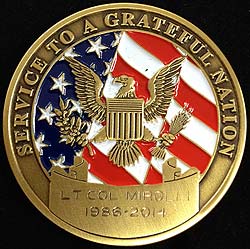 How many days go by before we remember that there are service men and women around the world standing watch during the night to protect our American freedoms? Do we realize that they truly represent our flag, enduring bombs bursting in the air around them or gun fire falling about them like a torrent of heavy rain, just so our own freedoms remain intact, flying proudly in the morning sun?

These brave men and women, like Lt. Col. David Mirolli, risked their lives for me. It was indeed an honor to sing for him on this special occasion. 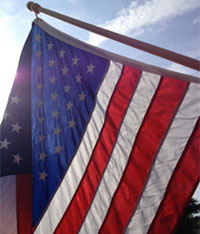 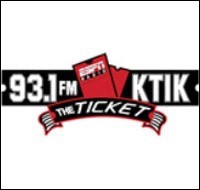