“In a hole in the ground there lived a hobbit…”

Professor J.R.R. Tolkien scribbled these words unexpectedly on a blank page in a term paper he was grading during the early 1930s.

He had no idea where the words came from or where they would lead, but he was determined to find out. He spent the next few years drawing upon his love of languages and mythology to craft the fanciful tale of Bilbo Baggins and his adventures in The Hobbit.

Since the book was first published in 1937, millions of copies of The Hobbit have been sold to readers around the world in more than 40 languages. New editions keep popping up, including a Latin translation published this September by HarperCollins.

The first live-action film adaptation of the book premiered in 4,045 theaters worldwide last week, setting box office records for a December release. The film, the first installment of a trilogy, was directed by Peter Jackson and produced in New Zealand by the same group that adapted The Hobbit’s sequel, The Lord of the Rings (LOTR), into the Academy Award-winning film trilogy.

Jackson and his screenwriters drew upon the extensive appendixes in the LOTR and other unfinished tales to write the Hobbit screenplay, positioning it as a precursor to the events in LOTR. This tactic mirrors Tolkien’s own intentions, for after writing LOTR, he made significant changes to the first edition of The Hobbit to synchronize it with LOTR.

For instance, in the original story, Bilbo does indeed play a game of riddles with Gollum to win his freedom. But when Gollum doesn’t guess that Bilbo has a ring in his pocket, Gollum kindly acknowledges that he lost the contest, allows Bilbo to keep the ring and politely shows him the way out.

Years later in the sequel that became The Lord of the Rings, Tolkien wrote that the ring in Bilbo’s pocket was actually The One Ring of power that the Dark Lord Sauron had fashioned to control all other rings of power. With such power in itself and over its bearers, the original scene in The Hobbit no longer made sense. Gollum would have never been so polite and allowed Bilbo to keep the ring without a struggle. So Tolkien changed the ending, portraying Gollum as a desperate, driven creature who had to possess the ring at all costs.

Jackson and the other screenwriters beautifully portrayed this revised scene in the film and finessed a few other scenes to give fans a fuller view of Middle-earth during this time period.

But at the center of The Hobbit, in both Tolkien’s book and Jackson’s film, is the gentle, somewhat reclusive Bilbo Baggins.

According to background materials, Gandalf the Wizard first noticed the hobbit when Bilbo was just a small lad. Gandalf was delighting children with fireworks at the birthday party of the Old Took, Bilbo’s grandfather (who went on many adventures). One of the fireworks was transformed into a fire-breathing dragon. At the sight of this, all the children ran away, except for Bilbo, who bravely stood still in wonderment.

Decades later, when Gandalf returned to the Shire in need of a “burglar” for an adventure, he remembered and sought out the young, fearless hobbit.

Who he found, however, was a hobbit fully entrenched in a solitary, sedentary life. Bilbo savored his time alone with his books, food and pipe weed. He was very set in his ways and did not go on adventures, which he said, are “nasty disturbing uncomfortable things” that “make you late for dinner.” 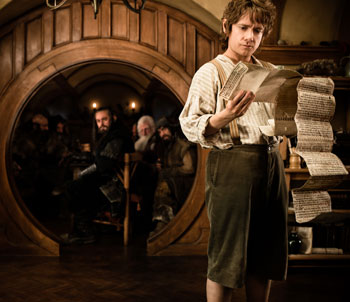 But on the adventure he did go, leaving his home with all its comforts behind. Why did he leave his hobbit hole and help the dwarves reclaim their gold and the lost kingdom of Erebor? A spark inside of him, originating from the Took branch of his family tree, blazed anew and inspired him to go.

Martin Freeman, the actor who delivers a remarkable portrayal of Bilbo in the film, answers the question. “Why does he go? Because he knows that he will never, ever have another opportunity like this.”

On the surface, the film is a rollicking romp through Middle-earth that delights viewers with scenes of Bilbo and the dwarves escaping from trolls, battling goblins and falling from flaming trees to be caught by giant eagles. But like much of Tolkien’s works, himself a lifelong Catholic, underneath the action in The Hobbit are inspirational themes that stay with us long after the closing credits:

Community – There’s a strong sense of community among the hobbits of the Shire. They know their neighbors and delight in the simple things of life. There is also a strong bond of loyalty between the dwarves, led by Thorin Oakenshield, who says “I will take each and every one of these dwarves over the mightiest army. Loyalty, honor, a willing heart – I can ask no more than that.”

Service – The dwarves, who recently have roamed Middle-earth without a homeland, greet Mr. Baggins at his door with a heartfelt “at your service.” Even Bilbo comes to realize that he has certain talents that can help the dwarves – stealth, cleverness, and a willingness to make a difference in the lives of others. He tells Thorin that he understands their plight: “I often think of the Shire. See, that’s where I belong. That’s home. You don’t have one, it was taken from you. But I will help you take it back if I can.”

Personal Growth – Even in the first part of the film trilogy, we see Bilbo grow from a sedentary hobbit to one who will fight to protect his life and those of his friends. “Along the way,” says Freeman, Bilbo “finds a bravery and nobility he didn’t know he had.”

Tolkien attributes Bilbo’s growth as a result of listening to the Took inside of him, the adventurous side that inspires him to actively use his talents to help others.

In a similar way, we can listen to the love of God inside each of us that “has been poured into our hearts through the Holy Spirit.” (Romans 5:5) We can step outside of our media-connected culture, appreciate God’s handiwork in the nature around us, and use our talents to help others. We can spread the love of God to our family, friends, and even the people around us who we don’t yet know.

So go on an adventure today and become more like Bilbo Baggins on this earth:

“It’s the small things,” says Gandalf, “everyday deeds of ordinary folk that keep the darkness at bay. Simple acts of kindness and love.”

More so than a hearty second breakfast, Christopher Fenoglio enjoys being called “Uncle Frodo” by his nephews.

Aragorn’s long, hard journey a lesson for all

Gollum & Smeagol: The struggle in us all